I found this “Ed’s” pipe in one of the lots that I purchased recently. I couldn’t for the life of me figure out who “Ed” was or why he had his own pipe line. But I noticed that it also had “506 Italy” next to the “Ed’s”. The more I looked at it, the more I thought that print looked like the Savinelli print. Sure enough, upon VERY close inspection, I found one of the Savinelli logos on the stem. It’s the logo that they used on some of their seconds lines that included a line and a star.

After thorough research on Pipedia and PipePhil, I was unable to turn up an definitive information. So in the end, I am not sure if this pipe was made for a specific shop or if it was made as a seconds line. In either case, it’s a pretty cool Savinelli. Check out the transformation below!

The Stem
I used my usual method of wet sanding the stem with 500 grit, 1000 grit, and 1200 grit. This part of the pipe takes me the most time so I do that first. I was very careful to leave what was left of the line/star logo on the side of the stem. I finished by buffing with red tripoli and then carnauba wax.

The Bowl
The first thing I went to on the bowl was getting out the nasty buildup by reaming the bowl. After that, I sanded the top of the bowl. I started with a low grit of about 200 because the buildup was bad. I then went to 500 grit, 1000 grit, and 1200 grit to top it off. It looked as if the previous owner had took out a couple chunk of the inside of the rim when reaming long ago. To help even those out a bit, I took some 500 grit sandpaper and used my finger to help round it out a bit. I didn’t completely smooth it out because I hate leaving a chamber more oval than round. That’s all personal preference of course! I finished up by re-staining the top of the bowl. The bowl also got a quick buff of red tripoli and carnauba wax.

Here is the finished product: 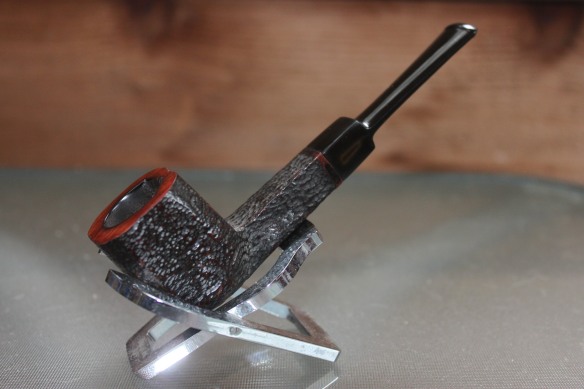 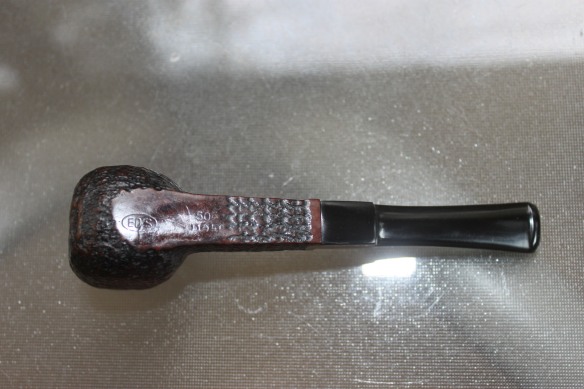 Thanks for reading! Let me know if you liked the way the pipe turned out or if you have any information regarding “Ed’s” pipes from Italy! 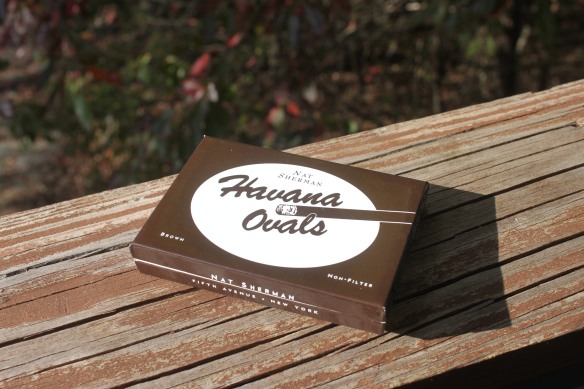 During my time in a retail cigar shop, there were quite a few people that came in and asked about Nat Sherman cigars. An even smaller portion would ask about the Nat Sherman cigarettes. I had heard of them, seen them advertised online or in a magazine, but I have never tried them until now!

While on a mini vacation to Gatlinburg this past weekend, I stopped into my favorite local shop, the Gatlin-Burlier. I have been in there quite a few times and make a point to pop in when I am passing through. I had never noticed that they carried the Nat Sherman cigarettes until this trip. For some reason they just caught my eye this time and I decided to take the plunge.

I left it up to my other half to pick which pack to go with. Thus, I ended up with the Havana Ovals (Brown). These are non-filtered and do actually have an oval shape to them. As the “brown” in the description suggests, these have a nice dark-brown color to them.

The aroma is pleasant, almost a “tea” type smell to them. The draw is smooth, definitely not too hard or too easy. The oval shape fits nicely between the lips for a relaxed fit while smoking. I really enjoyed the smoke from these. A hint of sweetness but also a steady richness throughout the whole smoke. I didn’t mind that they were non-filtered but I did end up with some small bits of tobacco in my mouth.

Final Thoughts
I liked them! I would consider buying them again in the future. They would only be for special occasions or if my circumstances dictate that I need short, quick smokes. These are a bit more expensive than regular cigarettes but you most certainly can tell the difference in the taste and the quality! If you like to change it up every now and then or find yourself curious about premium cigarettes, give them a try and let me know your thoughts!

I love the original Banker blend but I missed out on the limited Ingot LE last year. I was excited to get into this Ingot Rose this year and see what all the fuss is about! So here we go!

Appearance & Smell
I can tell a difference in the smell between the original Ecuadorian Habano and this new limited edition Dominican Habano. The Habano smells more earthy than the original. The cigar appears to not have as much oil on/in the wrapper as the original. It also appears to be slightly lighter in color tone. The logo and paper all have a rose-gold type color to them and it definitely catches the eye.

Smoke Preparation
For this cigar I chose to use a flat cut with a Xikar Xi1 cutter. The pre-light cold draw was surprisingly mellow and there were not any prominent flavors that stood out. I lit the cigar with a Xikar Enigma double torch lighter.

Burn & Draw
This cigar lit up with ease and immediately started giving off a decadent aroma and smoke. The draw was perfect for my preference, not too hard and not too easy. The airflow to the draw was good and helped to keep an even burn throughout the entire cigar. The smoke was rich and plentiful! The ash also held well throughout the smoke, I was able to do 1 inch ashes and could have gone longer.

Strength & Body
This cigar was a solid medium in the strength department. There was not a lot of deviation throughout the cigar when it came to the strength. Some cigars really pick up strength but this stayed very consistent. The body wasn’t overly complicated by any means. There weren’t a bunch of flavor changes or complexity. With the straight forward flavor profile, it is what I would call an “easy” smoke. Anyone could smoke it. It had some nuttiness, little bit of sweetness, and definitely cream. This would be a delicious after-dinner smoke with an evening drink!

Final Thoughts
As a fan of the original Banker line I definitely came into this smoke with high expectations! With that being said, I did expect a little bit more from the Ingot Rose. It was a good smoke. Solid construction. Solid burn. I think I just expected more in terms of flavor complexity. Maybe a little more nuttiness or spice would have built it up a little more. I plan on buying at least two more to possibly age and I might buy another couple to re-review due my bias coming into this first smoke.

Have you smoked one yet? What did you think? Feel free to leave your thoughts in the comments below! Thanks!